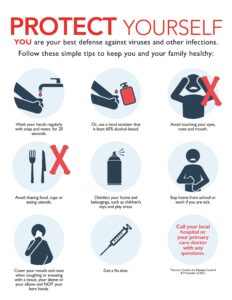 This year’s influenza season is well and truly underway, with many thousands of confirmed reports of flu virus being made early as March. As at 24th June 2019, there were over 21,500 lab-confirmed, reported cases of flu. This figure represents only cases where a test was performed, so the true number is likely significantly higher.

There have been 26 flu related deaths in Victoria so far this year, including 3 children and 23 residents in aged care facilities.

The flu season this year started much earlier than usual. Numbers usually peak between late June and late August, indicating this may be the most severe flu season we have experienced for the last 20 years.

The most common symptoms of Influenza include sudden high fever (over 38°), a dry cough, body aches and extreme lethargy. It may also cause other symptoms such as headaches, a sore throat, a runny or stuffy nose and sometimes, chest discomfort.

The best treatment if you have the flu is rest. You should stay at home and drink plenty of fluids. Adults are contagious for at least 3-5 days from when symptoms first appear. Children may be infectious for up to 7 days.

The virus is transmitted in tiny droplets from sneezes, saliva and coughing and can live on surfaces for up to 48 hours. A single sneeze can transmit droplets up to two meters away.

Our best methods for avoiding infection are hand hygiene and vaccination. Vaccination doesn’t protect against all strains of influenza in the community, but annual vaccine formulas are developed to target those strains that scientists have predicted will be most prevalent in the current flu season.

It is not too late to be vaccinated and vaccines are free for many high-risk groups including:

Call and book in your vaccination if you have not yet received it.